Any news from India?

Any news from India?

Excerpt from Dorothy Bruce’s new novel Any news from India 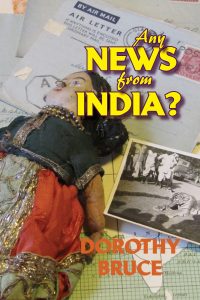 ‘I told you, I don’t have a brother or half-brother,’ she repeated. ‘You’ve mistaken me for someone else.’ Anxiety drained her face of colour. She ached to put a closed door between her and this stranger whose aim she suspected wasn’t merely to wangle his way into the house to rob her, steal the new television or her husband Colin’s golfing trophies. That kind of theft appeared innocent compared to his interest in her. What lay behind that? She had no idea. She was an only child, of that she was certain, so he was either up to no good, or was confusing her with someone else.

From the kitchen, she heard the coffee pot prancing like an agitated clog dancer on the ceramic hob. Boiled coffee. Ugh! She’d need to make fresh.

‘Please. Two minutes of your time.’ The stranger’s body shivered, shrinking into his clothes for warmth. His hand shuddered to the inside pocket of his jacket and tugged a photograph from his wallet. ‘Look,’ he urged, as he thrust it towards her. ‘It’s your mother…my mother. Bethida Dickson.’

With her right hand clamped to the door handle Ro inched out her left to take the black and white photo spider-webbed by creases. The woman captured in it wore a dated dress and jacket and carried a large straw bag. On her head perched a felt hat, at one side of which strutted a bow shaped like a shark’s fin.

The photo was redolent of the nineteen fifties or early sixties, the kind taken by seaside photographers so prevalent at the time. They snapped all who ventured along resort proms, ogled girls with their eyes and flattered women with words in the hope of a sale.

Ro’s heart performed acrobatics, simultaneous front flips and back flips, while an unknown hand twisted her temperature control from Arctic to volcanic eruption. She frowned, felt her throat tighten, loath to believe her eyes. The woman in the photo looked very like Bethida, her mother, whom this stranger was also claiming as his mother.

Dismayed, she thought she could even remember the dress, the hairy feel of the material and the smell of it when she sat on her mother’s knee to be comforted after some childish disaster. Red, geranium red, she was certain that was the colour, with a design below waist level in black braid. Her fingertips could almost feel the cloth-covered buttons at the back, the third one down looser due to her habit of twisting it when a bear hug thanked her mother for whatever treat she had promised in recompense for the hurt.

Yet, how was it possible? She didn’t have a brother. Or a half-brother. He must be wrong. She thrust the photograph back at him with a hand that trembled.

‘Sorry, this isn’t my mother.’ The tone of her voice was pitched to sound decisive, yet a quiver fluttered her words. She blinked rapidly to clear her vision as she raised her hand to push a strand of hair from her face, blown there by an icy gust.

In the sag of the man’s face she saw his confidence contract, a look of dismay replacing certainty that she would recognise the woman. He looked very cold now, his face pinched, his body huddled into his clothes for warmth. Disappointment dulled his eyes, stretched his mouth downwards. ‘I’m certain I’m related to you. I’ve read descriptions of this village, of people… There are links…perhaps another—’

‘You’ve mistaken me for someone else.’ Ro’s tone softened, as suspicions waned at his obvious disappointment, and sympathy for the stranger uncurled.

She wondered if she should invite him in for a cup of coffee, but held back, gripped by a cagey feeling, a wariness that sounded a warning, an internal voice that shrieked Identity theft. Recently, she’d watched a programme on television about it and, though fascinating, found it also alarming. The photograph, for instance, it could have been picked up anywhere with some scam in mind. And although it looked like Bethida, she wasn’t certain it was. Nor did she know the stranger, only who he said he was, and she was here on her own.

‘I’m sorry,’ Ro repeated, ‘I don’t see how you can possibly be my half-brother.’

The man’s hands trembled as he scrutinised the photograph then replaced it in his wallet. ‘I’m certain I am.’ His voice was roughened by the cold. ‘Won’t you let me explain?’

A smell of burnt coffee seeped from the kitchen, its acridity assaulting her nose. Ro felt she must be decisive. She urged a wan smile onto her face. ‘Look, if you think you’ve information that will persuade me, put it in writing.’ A safe compromise, she felt, one that allowed her to deal with the problem at arm’s length with advice from others. ‘I’ll have a look at it, I promise. But meantime I must go.’ She closed the door, though a feeling of guilt niggled. Nevertheless she eased the door key to its locked position before she dashed for the kitchen to retrieve the burnt pot from the hob.