Getting high: A world at my feet 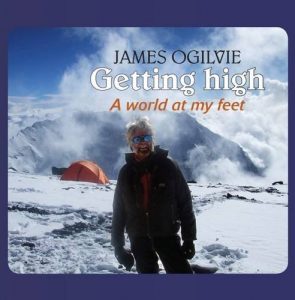 “As I stepped up to the top of Antarctica, the true scale, majesty and magnificence of the white continent were overwhelming. On one side the curvature of the earth could be discerned along the distant horizon. On the other side, remote peaks – most never touched by human boots – stretched out below me. I was in heaven – or at least as near to heaven on earth as I was likely to get. It was, finally, the end of an era, the end of an Antarctic Adventure and the end of my Seven Summits odyssey.”

James Ogilvie’s passion for wild places and ‘getting high’ shines through in this account of his climbs of The Seven Summits and other mountains.

“The Seven Summits – the highest mountains on each of the world’s seven continents – are regarded by many as the crown jewels of mountaineering, a rare prize sought by many but attained by only a few. The number of Brits who have summited ‘The Seven’ is only around forty, whereas ten times that number have stood on top of Mt Everest; the most famous mountain in the world and of course Asia’s highest point at 8,848m (29,029ft).

Each of the seven summits is unique, each special in its own way. Each varies in its technical demands and each provides an excuse – as if any were needed – for climbing amongst the most spectacular scenery in the world. At one level, climbing the Seven could be thought of as a self-centred ego trip, a kind of glorified ‘Munro bagging’ on a global scale. Therefore, partly to assuage my conscience but mainly because I believe that Tree Aid performs vitally important work, I have raised some £50,000 for that charity through all my climbs to date. “And what then?” you may ask. “What does a chap do after summiting the Seven?” Well, it’s a little known fact that the 2nd highest summits in the world’s continents are more technically demanding than the highest. Now THERE’S a challenge…”